The sterliad sturgeon, scientifically called Acipenser ruthenus, also called sterlet, its name refers to the small stellate bony scutes on its skin. It is one of the smallest species of sturgeon and the only species that lives only in freshwater (rivers) and is highly susceptible to contaminated waters.
The growth of this fish is slow, and in addition to its highly delicate and high-quality meat, it is also valuable as an aquarium fish. Its main food is crustacean, polychaetes, and insect infants. Due to overfishing and contamination, IUCN has identified it as a vulnerable species.
In the wild, the weight of a sterlet is up to 16 kg and its length reaches 100 to 125 cm. Under normal conditions the males mature at the age of 3 to 7 and females at the age of 4 to 12 and the appropriate temperature for spawning is 12 to 17 ° C. (Month of May)
In breeding farms, with good management, environmental and nutritional conditions, females mature to be 3 to 4 years old, weighing 1 to 4 kg and total length of 60 to 80 cm and their caviar can be obtained. Their egg laying in this condition is 12 to 17 percent of their body weight.
Acipenser ruthenus and Acipenser baerii are often not easily recognizable from each other. As mentioned above, the name ‘sterlet’ refers to the small stars on the body of the sterliad. The white corners of the fin and the lines on the skin of the sterlet make it distinct from the uniform color of the Siberian sturgeon. Its muzzle length is 37 to 49 percent of its head length and its life span is 22 to 25 years. 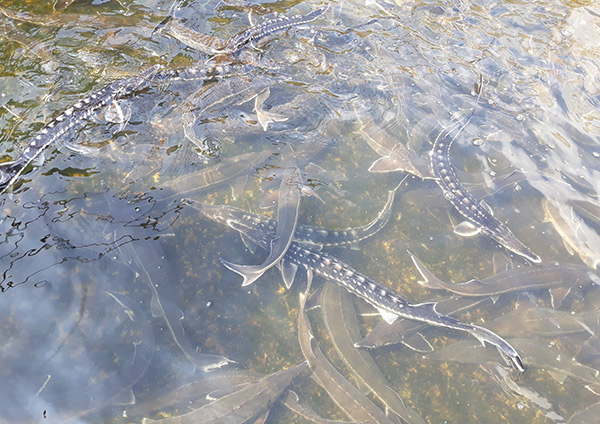 Another prominent feature of this species is the large number of lateral scute (more than 50) and filamentous mustaches. The difference between this type and the ship sturgeon that has all the above mentioned characteristics is that the lower lip of this species has an unattached middle cleft.
Its meat is very tasty, and its caviar is cheaper than various sturgeons. One of the characteristics and advantages of this kind of breeding is its fast return and easy breeding. Sterlet sturgeon sometimes reaches the level of caviar producing at weights even lower than two kilograms.
Considering that sturgeons produce caviar between 8 to 10 percent of their body weight, the sterliad produces caviar that is about 20 percent of its body weight, with its maximum weight not exceeding 5 kg. Therefore, because of its low weight and low cost caviar, it is not favored by breeders and few breeders breed such caviar.
Given that the Iranian Fisheries has been engaged in increasing the breeding of this species, Lazir Agro-Industrial Complex has also been breeding this sensitive species for about 5 years and has been supplying the caviar to domestic and foreign markets, and by breeding spawner sturgeons, while providing sterliad’s offspring for internal production, Lazir Company has also supplied it to other breeders and has contributed greatly to their supply in Iran.