Silver carp, known scientifically as Hypophthalmichthys molitrix, is known as phytophague or silver carp, and is grown along with other carp fish in soil ponds and reservoirs. This fish is sometimes falsely referred to as azad fish which is a false name. Azad in Persian is used only for salmon.
Its habitat ranges from northern China to the Amur River, the border between China and Russia, and mainly in the freshwater of the major rivers, and feeds mainly on phytoplankton, detritus, and bacteria. Due to the nutritional status of the silver carp, which is one of the healthiest fish in the world and due to the density and diversity of phytoplankton in the ponds and reservoirs compared to the natural environment, it has caused the meat of its type to have high levels of fat, protein, iron, calcium and omega-3 than its non-cultivated type. 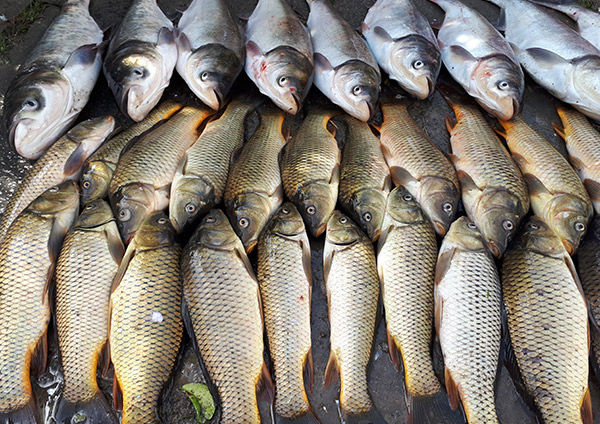 Because of the low cost of breeding, this species is among the cheapest breeding fish. It is therefore conveniently placed in the food basket of our citizens and is recommended for use throughout the week.
Since it is common in the north of the country, this fish is marketed both in salted and smoked varieties. Packaged fillets can also be institutionalized in our country. Silver carp often marketed and consumed in the domestic markets.

At the Lazir Complex we normally grow and supply 10 tons of silver carp (phytophgue) annually and deliver to domestic markets. The filleting, packing and processing of salted and smoked fish is on Lazir Complex’s agenda.